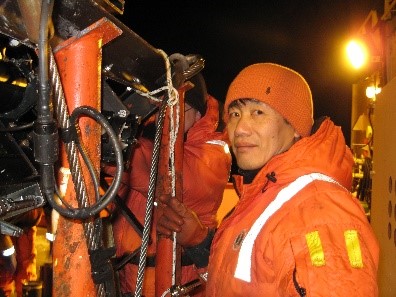 Meng Zhou, is a seagoing oceanographer in physical and biological oceanography. He received his Bachelor in Engineering from Tsinghua University in 1982, Master in Physical Oceanography from Chinese Academy of Sciences in 1984, and PhD in Oceanography from Stony Brook University in 1992; worked at Scripps Institution of Oceanography, University of Minnesota, University of Massachusetts Boston, University of Marseille, and Shanghai Jiao Tong University; and received EU Marie Curie People Fellow in 2007, Chinese Taishan Scholar in 2009, French Chair of Excellence in 2010, and Chinese National 1000 Talent Experts in 2012. He worked on numerous interdisciplinary projects from coupled advection and behavioral processes of marine organisms, transport of nutrients and biota, and plankton population dynamics, numerous integrations of physical and biological sensors for high speed measurements at same times and locations with same resolutions, and numerous cruises from the New York Bight, California Current, West Pacific Ocean, Norwegian fjords and shelf regions, Barents Sea, Southern Indian Ocean, Southern Ocean and South China Sea. He is the Founding Dean of the Institute of Oceanography at Shanghai Jiao Tong University with a mission to integrate ocean sciences and technologies for addressing emerging environmental and climate questions in the ocean.

We are Oceans'16 ,Shanghai. Every year we are aiming to link you to the future.

For general information about the event/expo/conference, including registration, please contact us at:
This email address is being protected from spambots. You need JavaScript enabled to view it.
Conference Secretary:Miss Yujun XU